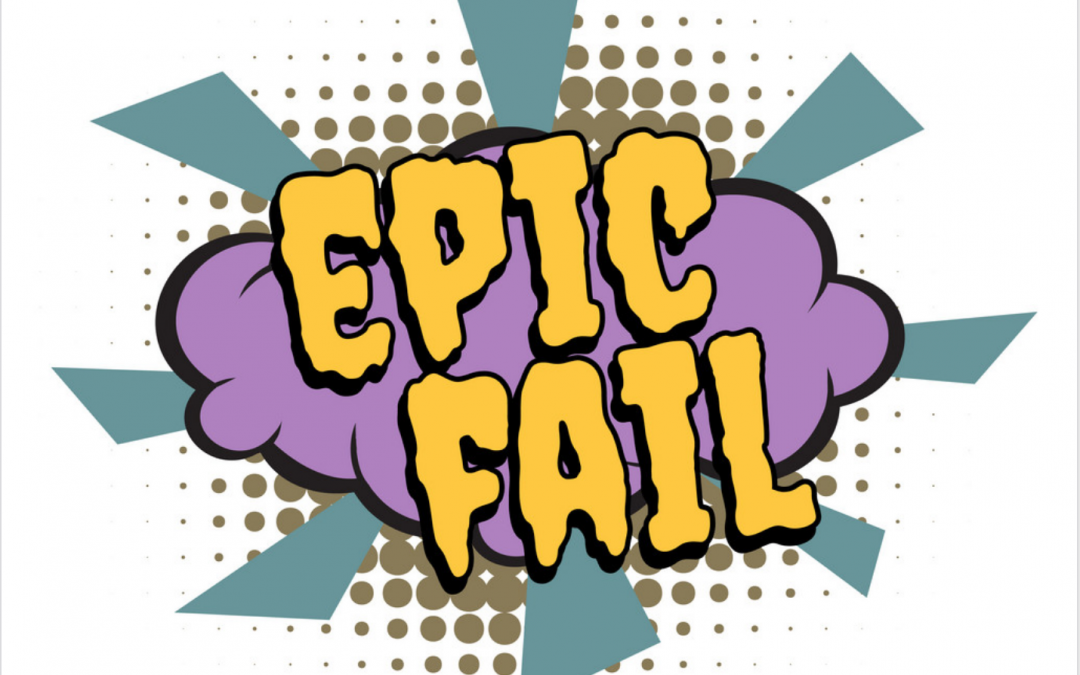 Why are we talking about FAILURE?

Glossy, edited and high quality art often takes the spotlight. However, there are stories of failure, pain, compromise and humor on the journey toward success.  It is often said that failure breeds success.  Actually, its more complicated than simply failing once and succeeding the next time.  Failure is only evidence of success when a person learns from a mistake and makes an essential pivot.

In fact, scientists are using big data to understand the characteristics and differences of winners and losers. What has been revealed is that that winners and losers fail in equal amounts, but winners take failure as an opportunity to make changes or do something different.  This is important when we think about entrepreneurship. Many artists are also entrepreneurs and even though they may not know it, they follow similar creative processes as design thinkers.  Artists, like designers, start with empathy for a person, community, material or story and then define and ideate in order to understand that story deeply. Whether you work with clay, music or movement, the creation process includes the prototyping of a product – experiments with texture, tone or somatics.  These prototypes or what artists call W.I.P.’s (works-in-progress) are iterative and meant to be critiqued and scaled up in order to complete a final work.  Check out the recording here.

Often the process of creating is sticky, confusing and most certainly full of trial and error.  And sometimes, the challenges and setbacks are UTTERLY DISASTROUS.  Inspired by a conversation with my friend, the dance and performance artist Clint Lutes, I conceived the theme for this campfire. It is important we uncover failure and also emphasize the importance of growth and resilience. Clint and I attended New York University – Tisch School of the Arts together (both as transfer students) in the late 1990’s.  Now, Clint is an accomplished artist living in France but I had so easily forgotten his story of failure.  This EPIC FAIL is the story that propelled him toward new choices and the ultimate reason we became acquainted.

Here is Clint telling his story of failure and resilience . . .

When asking creatives about their failures in preparation for this webcast, I was shocked by the amount of responses and the broad ways that individuals considered failure.  For example, I had an undergraduate student divulge that her epic failure was attempting to do a credit-heavy performance major while while also playing varsity sports, concluding in burnout.  Another dance educator wrote about an accident that shattered her pelvis and threatened her ability to walk. She fully recovered and is actively teaching and dancing. From on-stage bloopers to broken sculptures, jarring public criticism to happy accidents the range of failure is unbelievable. The stories are testament to the importance of accepting and reflecting on our EPIC FAILS so we may be resilient in the face of challenge and adversity.

Scott Plante artist an athlete a son a friend and a giver. He is a New Hampshire-based singer/songwriter playing live shows across the state. Music was the gift and force that propelled him to success after incarceration and he uses his passion to educate, support and inspire his community.

Scott’s journey through incarceration to spiritual freedom and from self-hate to self-love unfolds in his debut EP called Identity Crisis, using multiple musical genres including metal, pop, alternative and rock. From addiction to dedication and destruction to preservation, Scott says:

“There’s music for every moment and I choose to not stay in a box and only allow myself to express my emotions through one musical outlet. I embrace music as a whole and use all of its outlets to express what it is I have to say.”

Sam St. Jean is an actor, comedian, podcaster, food-enthusiast and New-Englander! Born and raised in Goffstown, New Hampshire, Sam is back home from New York City due to the covid-19 pandemic. Before the shutdowns, Sam was enjoying his first National Tour, appearing as Augustus Gloop in Charlie & The Chocolate Factory!

Along with lifelong friend, Amanda Harrington, Sam has just released a new podcast called Buzzed Broadway. Check out the trailer and stay tuned for new episodes on Spotify and Pocket Casts. Sam and Amanda recount their experiences sharing the stage together over the last two decades and discuss what makes Broadway so beloved. Add in a few cocktails or a bottle of wine, and you won’t believe some of the hilarious stories Sam and Amanda have to tell. So, pick out a cast album, pour yourself a drink, and press play on Buzzed Broadway! Instagram: @buzzedbroadwaypodcast

Jared Steer is a dad, drummer, mountain lover, and educator living in the Lakes Region of New Hampshire.  He makes a living by playing music and teaching music classes and lessons at various schools across the state. An expressive drummer/percussionist he currently plays with:

Take a listen to “Stew” by Urethane, ft. Jared Steer

On Creative Campfire, Jared performed “Kinka”, an African drum-set etude in which he arranged for this event.  Learn more about Jared and listen to his music at his website, www.jaredsteer.com and on Facebook.

Ginnie Lupi is an optimist, slave to her cat,  geek, connector and artist.  She is the Director of the NH State Council for the Arts and a fierce advocate for creative workers.  She delivered the information FAST BLAST tonight, highlighting the newest Artist Relief Funds. Please visit the New Hampshire State Council on the Arts for more details.

Cathie LeBlanc geek, cat mom, bicyclist, movie lover, computer scientist. She is a Professor of Digital Media and the Coordinator of General Education at Plymouth State University where her course “Creating Games” is popular among undergraduate students.

“As a computer scientist, I was most interested in questions of how technology can be used to aid us and how its use hinders us. I’m still interested in those questions. I now study these issues from the context of digital media, especially games and online social networks. I am particularly interested in the rhetoric of these digital media, that is, how those media communicate their messages and persuade us to think and act in particular ways.”

Catherine Stewart is a playwright, big thinker, collaborator, mover,  and knitter.   She is the new Artistic Director at New Hampshire Theatre Project as well as a freelance playwright, director and projection designer in Portsmouth, NH. A recent member of the Lincoln Center Directors Lab, she uses documentary theatre to excite social and political change.

Since relocating to New Hampshire in 2012 from her native Scotland, United Kingdom she has worked with a variety of arts organizations as a freelance tutor, director and facilitator, including Arts in Reach, Winnepesaukee Playhouse and New Hampshire Theatre Project. She is a co-producer of the Tiny Mayhem Performance Lab and Circulus Arts, innovation hubs for the creation and production of contemporary performance.  Her most recent playscript, Over the Fence, won first place in the PPAF 30 Pages in 30 Days Playwriting Festival, which was staged at Prescott Park Arts Festival in the summer of 2017.

Catherine has so many interesting projects and experiences under her belt! It seems that she is perpetually in motion as she moves between all her creative interests and endeavors. Check out her full bio on her website at www.makecreatemore.com and the work of New Hampshire Theatre Project at www.nhtheatreproject.org  Find Catherine on Facebook or on Instagram and Twitter @MakeCreateMore

C. Robin Marcotte has wonderful artistic and teaching “chops”.  Check out his website for the skinny on his work.  You can also peep ARTICINE, the non-profit he co-founded here.  Robin and Amanda have been collaborators for the past five years!

Our webinar was made possible with support from Plymouth State University! Tech royalty Brett Robinson and Travis Rubury made sure we were functional and supported from set up to close! Thank you!

Join us next time!

The third and FINAL campfire in this series is on TUESDAY, May 5, 2020 at 7:30pm EST.  Our theme is WORD DANCE and we will be smashing poets and dancers together for interactive live performance! Don’t miss it!